The science fiction movie “Alien” (1979) introduced us to the scariest alien of all time, as well as its sinister juvenile forms (facehuggers and chestbursters). It seems to me that’s just art imitating life.

If I had to pick a favourite science fiction movie it would be Aliens (1986), the second movie in the Alien series. Who can forget Sigourney Weaver’s immortal line “Get away from her, you bitch!” as she prepared to battle the alien queen? The scene where the alien’s extendable jaws get very close to Sigourney’s face is downright terrifying. But where did the idea for those extendable jaws come from? HR Giger, the graphic artist who designed the alien and won an Academy Award for his efforts, said “I hadn’t studied any animal. My instructions were that it should be somehow frightening and horrible, and I did my best. We come to the conclusion that we must make the beast blind and give it a terrific set of teeth – something like the detail in Francis Bacon’s Crucifixion triptych.”

I wonder if Giger knew that extendable jaws are old hat in the insect world, because insects with such mouthparts have existed for hundreds of millions of years. I am referring to the nymphs of damselflies and dragonflies (Odonata), sometimes known as ‘mudeyes’. These aquatic predators have elaborate hinged mouthparts which they can extend rapidly. Check this YouTube video out – it even references Aliens! The nymphs achieve this by local increases in blood pressure caused by sharp contraction of their abdominal and thoracic muscles. All odonate nymphs are predaceous and may be ‘ambush’ or ‘attack’ predators depending on the species. The nymphs feed on immature aquatic insects such as midges and mayflies, tadpoles, and small fish. I don’t have a shot of dragonfly nymphs underwater, but I reckon this image of a cobweb festooned nymph skin (below) looks a bit alien! 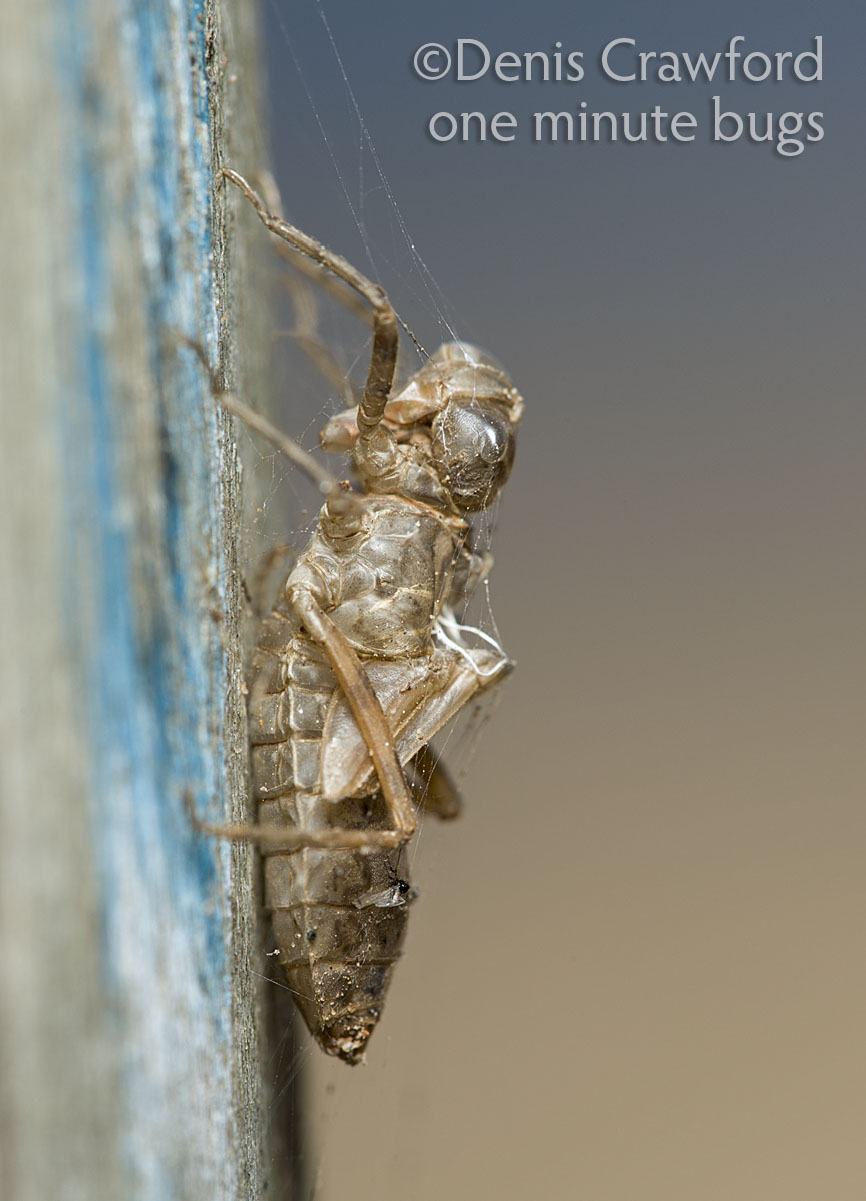 What of Alien facehuggers? Surely that’s fanciful? A facehugger is the second stage (after the egg) in the Alien’s life cycle. It has eight spindly legs, which allow it to crawl rapidly, and is somewhat similar in appearance to an arachnid or perhaps a horseshoe crab. The similarities end there because the facehugger is a parasitoid – its only purpose in life is to implant an embryo (which eventually becomes a chestburster) within a host – invariably in the movies the host is a human!

Note that word parasitoid. A parasitoid spends most of the juvenile stages of its life cycle inside or attached to a host, and eventually kills that host. A parasite feeds on or within its host without killing it. Eight-legged parasitoids are a Hollywood invention but six-legged parasitoids are abundant. Check out my earlier blog post I love parasitoids. I usually refer to them as parasitic wasps but the correct entomological term is wasp parasitoid. These beneficial wasps kill their hosts upon emergence – which leads us neatly to ‘chestbursters’.

‘Chestburster’ sounds like a particularly silly concept that could only have been dreamt up in Hollywood but, alas for entomophobes, it happens regularly in the insect world. For example, there is not much left of a cabbage white butterfly caterpillar (Pieris rapae) when 50 Cotesia glomerata wasp larvae burst from it to pupate.

Some wasps even recruit what is left of the host as a guardian for their pupae. For example, the wasp Dinocampus coccinellae lays an egg in a ladybird beetle and the hatching wasp grub develops through four instars. Just prior to emerging from the host beetle, the wasp grub secretes chemicals which paralyses the ladybird. The wasp grub then emerges and pupates between the legs of the still twitching ladybird beetle (picture below). There is no safer place for an insect at its most vulnerable stage than between the legs of a not quite dead predatory ladybird. Apparently if you move the ladybird beetle away from the wasp pupa it will stagger, zombie-like, back to its original position. 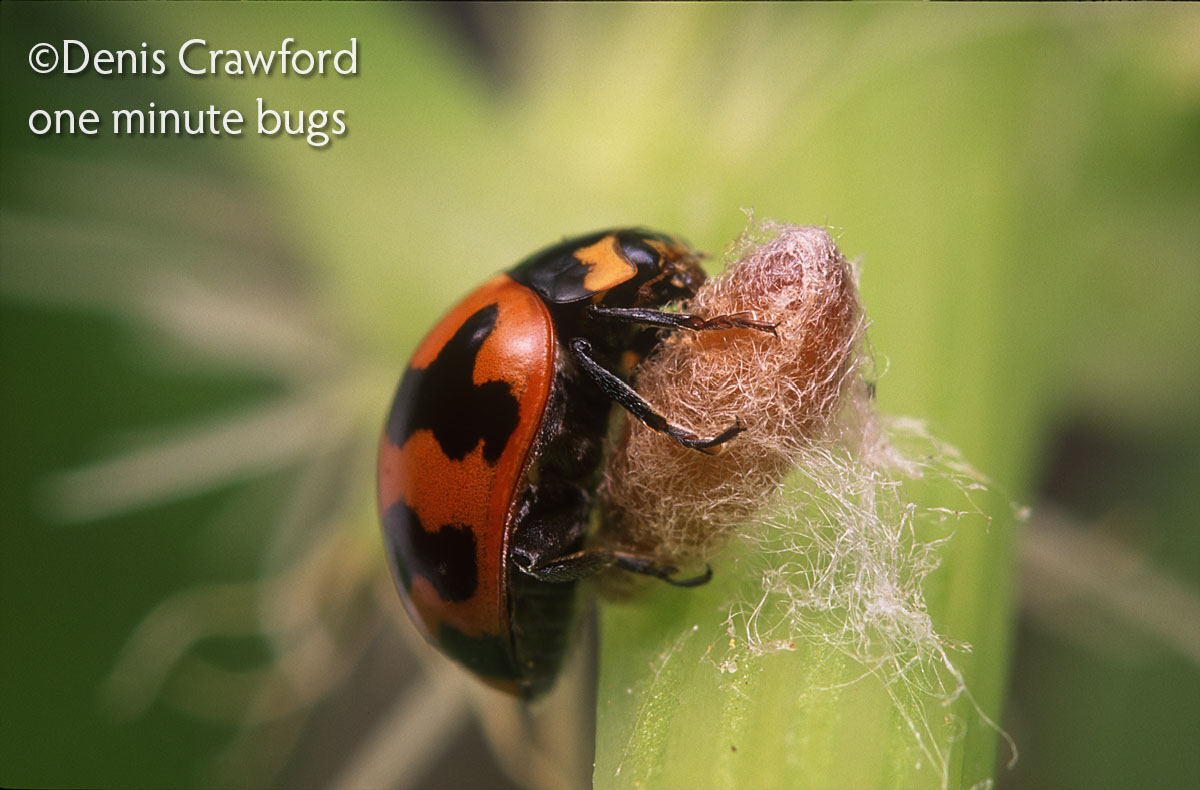 The connection between insects and Hollywood is quite direct with certain movies. At the Joint Annual Meeting of the Entomological Societies of America, Canada, and British Columbia in November 2018, graphic artist Ryan Church shared his journey from a youthful fascination with insects to a career in movie design. Church has worked on numerous Star Wars movies, Star Trek, Avatar, War of the Worlds, and John Carter. He says he finds his inspiration in the world of insects and you can clearly see that in the gossamer winged airships featured in John Carter – think adult dragonflies.

There are plenty of other sci-fi movies inspired by insects such as Them! (1954), The Fly (1986), Starship Troopers (1997) and Mimic (1997). Just in case you think this article is merely a nerdy ode to Hollywood Sci-fi I should point out that I have mentioned some pretty important beneficial insects here. Dragonflies and damselflies are predatory insects both as adults and as nymphs, and are particularly important around waterways. As for wasp parasitoids, horticulture and agriculture as we know it would collapse without them. Predatory and parasitic insects are also vital in the natural environment and some of them have been around for a long time. To illustrate that, here is a story from yesteryear to finish with.

130 million years ago, on a tree trunk deep in the conifer forests of the Levant, some strange looking insect eggs were showing signs of life. The eggs were vaguely ‘egg shaped’ and each one was perched above the tree bark on its own stalk. Faint scratching could be heard, until the eggs began to split and a dozen Tragychrysa ovoruptora emerged into the light. They were hatchling green lacewings of the family Chrysopidae – but they were about to die.

We know they died because these particular insects are locked inside pieces of amber – frozen in time, eggs and all. They were the subject of a recent scientific paper. The paper describes how the sap, which eventually set to amber, caught the hatchlings in various stages of egg emergence. Researchers were then able to study the mechanism which the insects used to break out of their eggs – a method which has changed little in 130 million years.

In the words of one of the researchers, “Modern green lacewing hatchlings (image below) split the egg with a ‘mask’ bearing a jagged blade. Once used, this ‘mask’ is shed and left attached to the empty egg shell, which is exactly what we found in the amber together with the newborns.” The name usually given to such an egg-splitting mechanism is “egg burster”. Hello Hollywood! 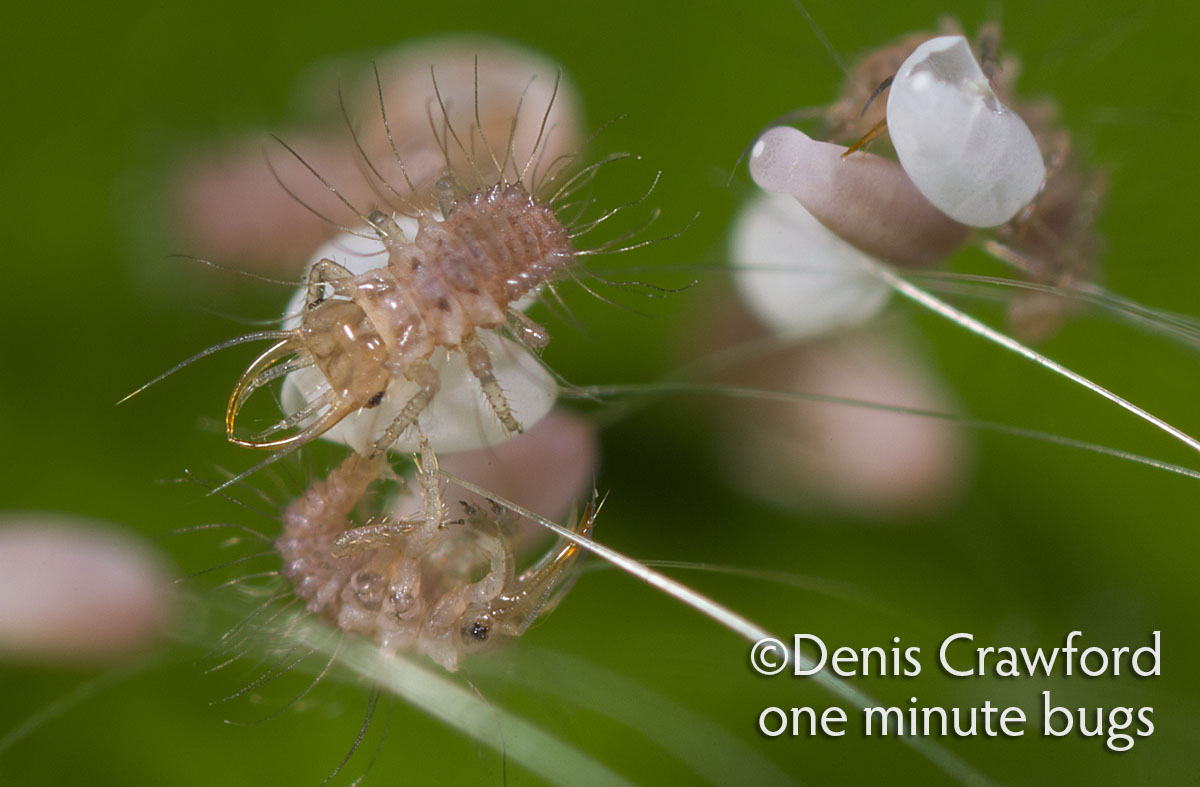 This article was first published in the February 2019 issue of Hort Journal.

You can be lucky sometimes! I had read about the insects commonly called “mantis-flies” and seen many images of them, but I had never seen a live one in the flesh. We were at dinner with neighbours one night when one landed by my plate of food – no kidding. Pandemonium ensued as I tried to catch it, shouting for a container of some kind. Finally it was corralled and I had one to photograph. Here it is! (below) 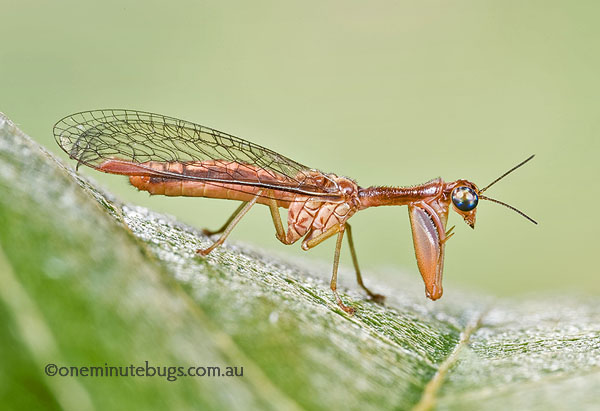