As winter sets in there are less and less flying insects to be seen, which might seem like a bad time to be an entomologist. But even in the middle of June there are still plenty of insects around – you just need to know where to look. Personally when I get a bit desperate for hexapodal company I head for the nearest gum tree.

Gum trees (Eucalytpus spp., Corymbia spp and Angophora spp.) are hosts to myriad insects but today I want to talk about the insects which form “lerps” on gum tree leaves. A lerp is the white sugary, waxy covering which the immature stages of some psyllid insects (family Psyllidae) produce from liquid excretions known as honeydew. There is disagreement among scientists as to the purpose of the lerp. Some argue that the lerp is protection from predators, while others insist that it provides the immature psyllid with a more humid environment. Perhaps it is a mixture of both. The image below shows an intact lerp in the upper image and then moved to reveal the Glycaspis sp. nymph underneath. 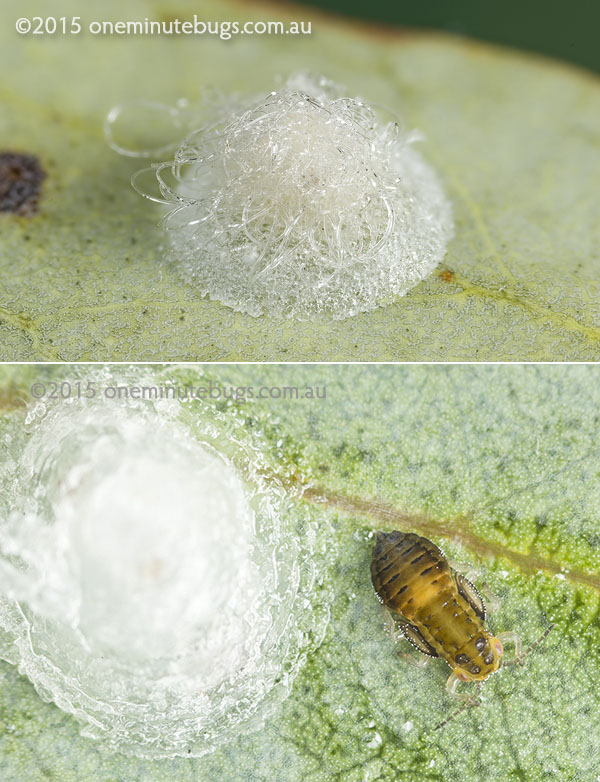 The appearance of the lerp varies greatly between psyllid species; some are simple scale-like coverings while others can be quite ornate, for example basket lerps (Cardiaspina spp.) as illustrated below. The psyllid insect underneath the lerp grows to about 3 millimetres long, after passing through 5 moults or so, before emerging from under the lerp as a tiny winged insect (which looks a bit like a miniature cicada). 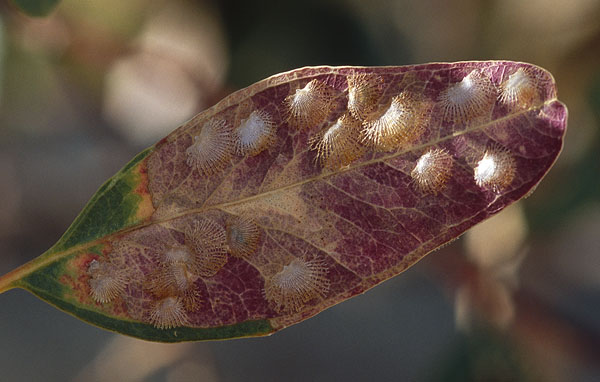 When psyllids suck sap from leaves they remove some of the plant’s chlorophyll, resulting in a distinctive motley appearance to the leaves (as above). Plants that have already been stressed in some way, for example by drought or attack from other insects such as caterpillars, are particularly vulnerable to psyllid damage. A severe infestation may cause excessive defoliation, which leads to a decline in tree health and growth and, in some circumstances, tree death.

Predators such as birds, spiders and insects are some of the natural enemies of psyllids. However psyllids are often attended by ants seeking honeydew (see below), which can drive small predators away. My next post will be a short video about sugar ants and lerps which I filmed in Wyperfeld National Park a couple of weeks ago. 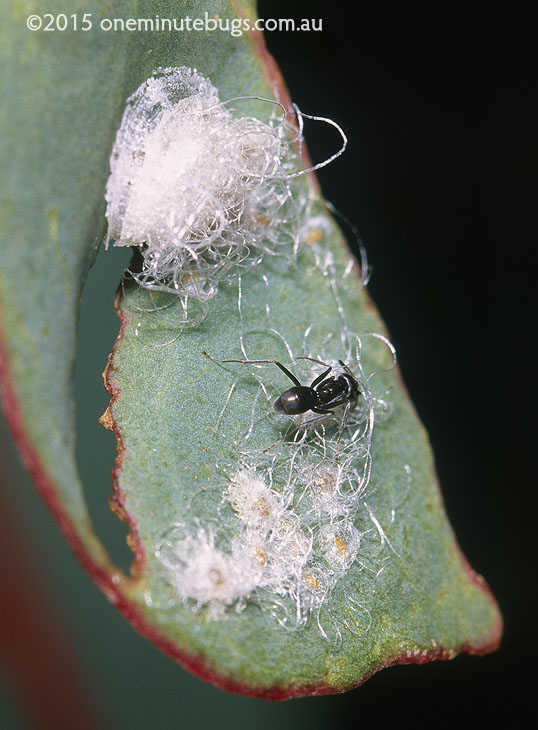