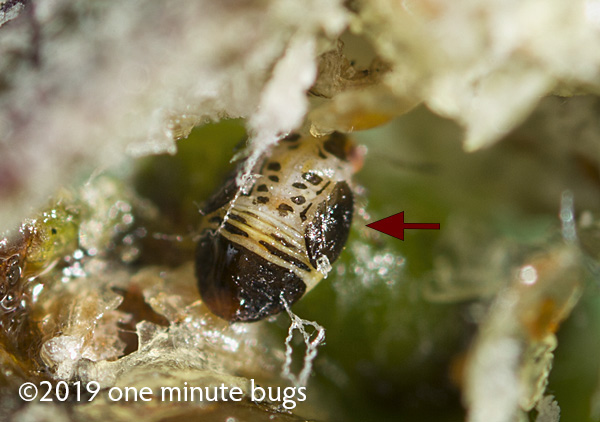 I put the nymphs, and the leaves they were on, into a sealed container and waited. A few days later there were tiny adult insects about 2mm long flying around inside the container. They were not psyllids; they were tiny wasps – the parasites of psyllids! I identified the little wasps as being in the genus Psyllaephagus (Hymenoptera: Encyrtidae). There are about 60 wasps in that genus found in Australia, and they are exclusively parasites of psyllids – so the insects damaging the Murraya hedge had to be psyllids! After a few days my jar was full of these little wasps, indicating that the psyllid infestation on that Murraya hedge was heavily parasitised. 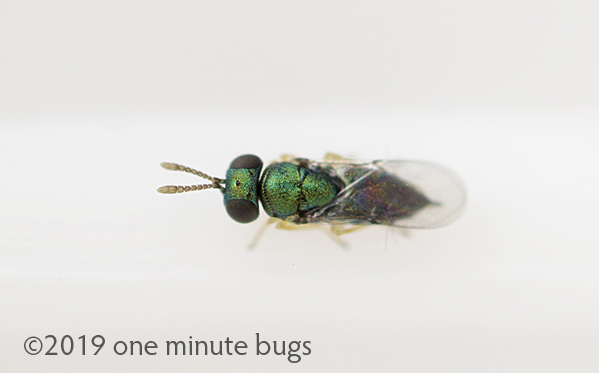 So what to do with the hedge? Psyllids can be controlled with a couple of horticultural oil sprays. But an oil spray would kill parasitic wasps, especially ones this small, as efficiently as killing the psyllid nymphs. The specimens in the jar indicated that the majority of the psyllids were parasitised, and would cause no further damage. Personally I wouldn’t spray at all in such a situation, because I would be confident of the wasps winning the overall battle. However it is difficult to convince other people to let nature take its course – yep, the hedge was sprayed by the landowners. I need to be more convincing next time!

I have had unexpected guests in my insect containers on other occasions. For example, I collected a mantid egg case (ootheca) and kept it in a container on my desk so I could watch the nymphs hatch. Unfortunately I didn’t put the lid on the container properly. One morning I caught a movement out of the corner of my eye and looked up to see several tiny mantid nymphs lined up on the top of my computer monitor. There were also several on my desk lamp, my phone, book shelves, the slatted blind, computer speakers, the printer, and so on. It took a while, but I managed to wrangle them all into a container and released them outside. 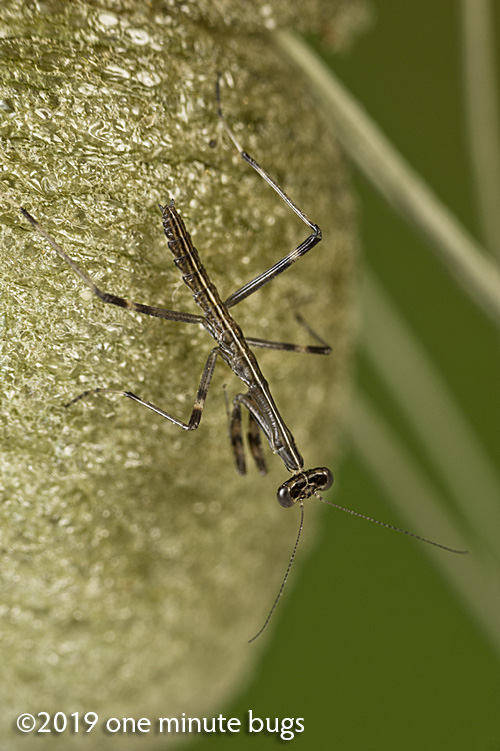 Later that day I was able to take some photographs (like the one above) and videos (I’ll use that footage sometime) of other mantid nymphs emerging from the egg case. But it was what happened next that was more interesting. When I examined the container a couple of days later what did I found flying around inside it? You guessed it – several parasitic wasps (about 3-4mm body length). I identified them as Podagrion sp. (Hymenoptera: Torymidae) wasps – known parasites of mantid egg cases. 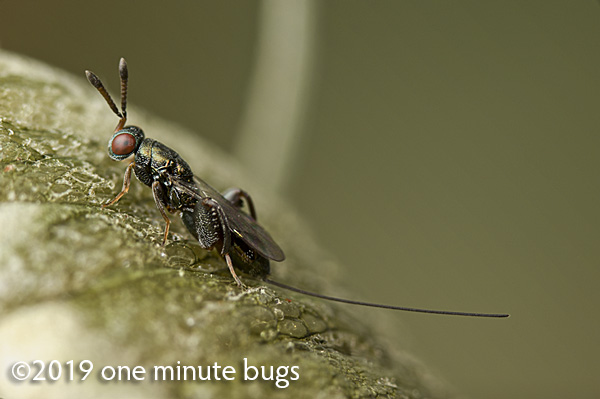 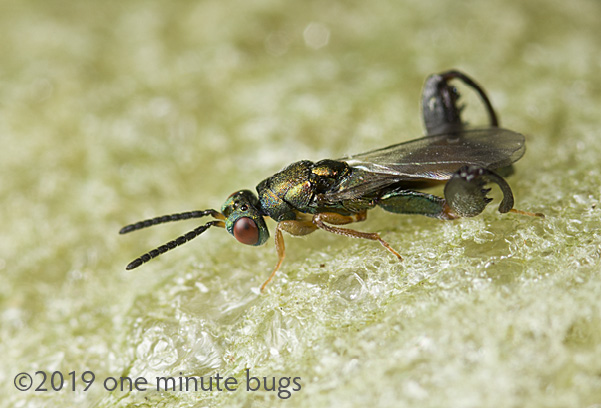 As mentioned above, the mantid egg case yielded a mixture of mantid nymphs and Podagrion parasitic wasps. In other words the mantids weren’t wiped out entirely. Some people think that parasitism is a bad thing. I think it’s incredible that these tiny wasps have evolved to occupy an ecological niche such as the inside of a psyllid nymph, or a mantid egg case! The wasps’ lives are so entwined with that of their host insects, that the wasps can’t survive without that other insect. If the wasps killed 100% of their hosts 100% of the time, the wasps would die out. That would be a tad counterproductive!

This is a video about ants which visit my cherry tree. The story is primarily about meat ants (Iridomyrmex purpureus), but a couple of other species make cameo appearances. Why do the ants climb into my cherry tree? You’ll have to watch the video to find out!

I hope you enjoy the video – as usual, being ‘one minute bugs’, it’s short and sweet! Let me know what you think. Please hit the subscribe button in the widget if you would like to receive email alerts about new posts. The subscription process is more than one click, but it won’t take too long!

I was doing a bit of Spring cleaning on my blog and noticed that this post is the most popular post I have ever written. Usually I am lucky if I have 500 people read one of my posts, but this one has clocked up a whopping 8738 hits! So I am republishing the post for those that missed it when I first published it in October 2015.

Have you noticed strange lumps and bumps on the leaves and stems of some of your Australian native plants? Galls are especially common on gum trees and wattles, and they are abnormal plant growths that form in response to invasion of plant tissue by a variety of organisms. Galls can be caused by certain species of wasps, flies, beetles, psyllids, coccids, thrips, moths and aphids, as well as by nematodes, mites, bacteria or fungi.

Galls form as a reaction to insects feeding on, or their eggs being laid in, plant tissue. When a female gall-inducing insect deposits her egg in the leaf or stem of a host plant, a biochemical reaction between the egg and the host may produce the gall, inside of which a hatching larva will feed. Or the larva may modify the plant’s normal response to injury with salivary secretions, which stimulates the plant to grow the gall (rather than scar tissue), resulting in food and shelter for itself. Gall-inducing insects (adults and juveniles) are usually very small, rarely more than a few millimeters in length, but the galls they induce are much more obvious. 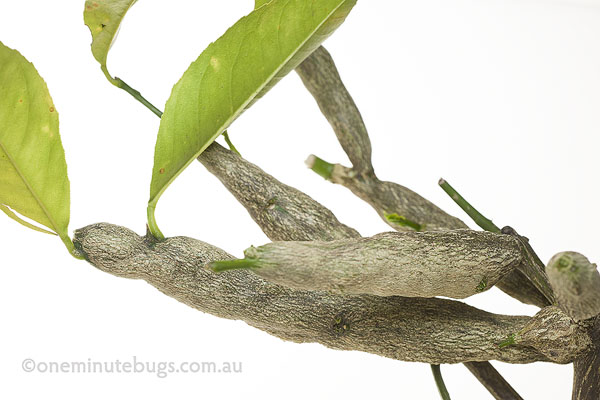 Gall wasps are found throughout the world, and the most well-known gall wasp in Australia is the citrus gall wasp (Bruchophagus fellis) which forms grotesque stem galls on all varieties of citrus (above). Citrus gall wasp is actually an Australian native insect whose native host is the Australian finger lime (Citrus australasica). It has grown to love our cultivated lemons though!

Galls formed by other species of wasps are found on eucalypts, acacias, banksias and some cut flower natives like Geraldton wax and Thryptomene. 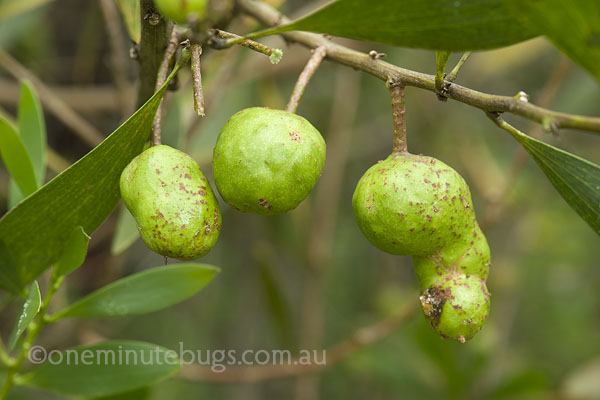 Galls on wattles are often called “apple” galls (above) and are induced by wasps of the genus Trichilogaster. Depending on the species of wasp and the size of the gall, hundreds of larvae may feed inside a gall. Some species of wasps form galls on leaves which are characteristically spherical and are bisected by the leaf margin, and often cause leaves to twist. Galls formed by other insects are located on only one side of a leaf. 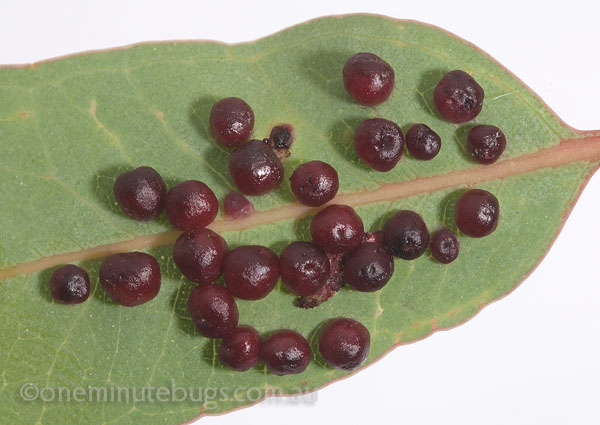 Flies which form galls are usually midges in the family Cecidomyiidae. The larvae of some gall midges cause a thickening and shortening of leaflets, or pimple-like blisters (as above) on leaves (especially on eucalypts). Eucalyptus leaf galls usually contain a single orange or red larva which distinguishes it from most other larvae found in galls which are typically cream or white in colour. 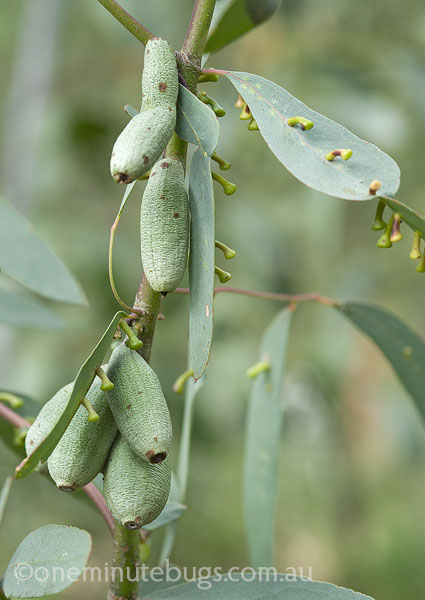 Coccids are related to scale insects and cause hard woody galls, some of which have distinctive shapes. Galls caused by male coccids are usually a different size and shape to those caused by female coccids. The gall-former shown (above) is a species of Apiomorpha in the family Eriococcidae. Female Apiomorpha induce the large stem galls, while  males induce the small leaf galls that you can see. 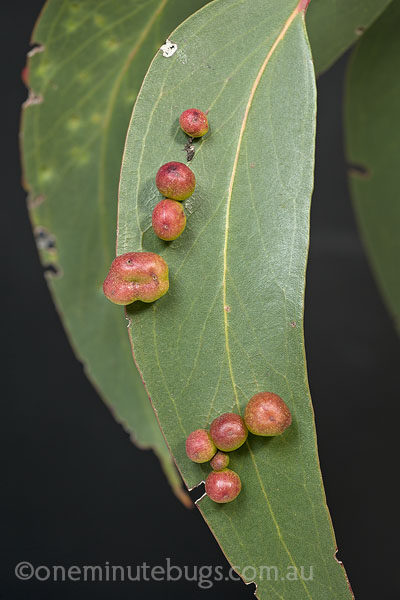 Psyllids in the family Triozidae cause galls on native trees. Schedotrioza spp. form distinctive spherical “apple” galls on eucalypt leaves (above). The galls of the notorious lilly pilly psyllid (Trioza eugeniae) are quite different (below). The nymphs of this pest form pit galls on flush growth usually on the underside of a leaf with a corresponding lump on the upper surface. Unlike most other gall insects the nymphs are not fully enclosed by the gall. The nymphs are the small flattened yellowish creatures in the image below. 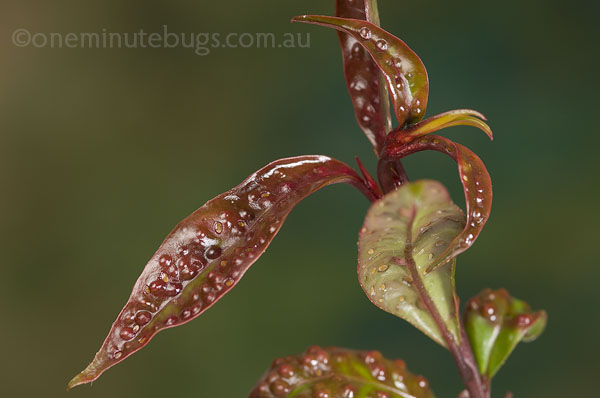 Some varieties of lilly pilly like Syzygium luehmannii and Acmena smithii are less susceptible to attack than others. But lilly pilly shrubs of susceptible species (such as Syzygium panicultaum and Waterhousea floribunda) can be devastated by psyllid attack. Most other gall-inducing insects are not so serious though, an infestation won’t kill a tree or shrub, but can be unsightly and may affect plant vigour.

Identification of gall-forming insects is not easy. You could keep a gall in a jar to see what emerges, but that may not help because what emerges might be a parasite of the insect which caused the gall, or a hyperparasite (parasite of a parasite). Sometimes an egg may be laid into a gall already containing the larva of a different species, the new egg hatches and the emerging larva will feed in the gall alongside the original larva. When they both hatch out as adults you won’t know which insect caused the gall. Insects which adopt this ‘cuckoo’ style of living are known as inquilines. Insects never cease to amaze me!