The Grampians region of Victoria is one of Australia’s richest and most diverse flora areas. One third of Victoria’s flora is represented here so it is no surprise that the region was once dubbed “the Garden of Victoria” by the great botanist Ferdinand von Mueller.

Spring is an excellent time to see wildflowers throughout the region, especially terrestrial orchids such as the Mantis Orchid (Caladenia tentaculata) pictured below. It is one of the green-comb Spider Orchids and is common throughout the Grampians region. The colourful and flamboyant flowers of this orchid may be pleasing to the human eye but they are simply irresistible to certain male insects. 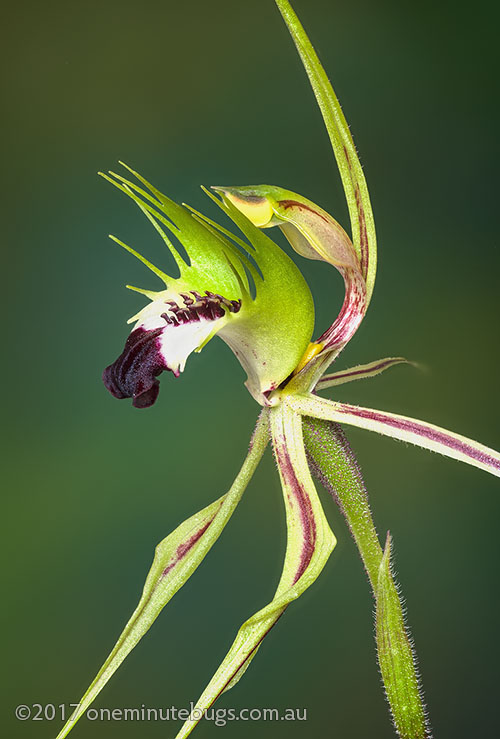 The Mantis Orchid is one of many sexually deceptive orchids. Orchids such as these don’t have nectar to reward pollinating insects so they must attract insects some other way.  The orchids lure male insects to their flowers with scents that mimic female insect sex pheromones. The labellum of the flower where the male insect lands is hinged and swings the insect against the sexual organs of the flower. During its struggles to mate with the flower the insect will either pick up pollen, or deposit pollen that it has acquired from another flower.

The insect pollinator of the Mantis Orchid is a thynnine wasp of the family Tiphiidae. These wasps are the most important insects which pollinate Australian terrestrial orchids by pseudocopulation. The wasps are also remarkable because males are winged and females are wingless. A female wasp finds a mate by advertising her presence with pheromones, the male picks her up and mating occurs in flight. It is quite common to see mating pairs flying around our property. A mating pair of thynnine wasps is pictured below. 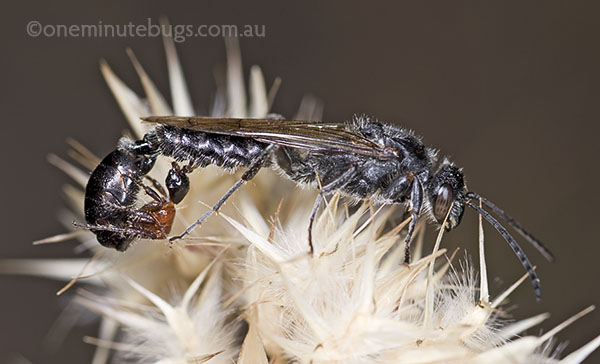 All this flying around while mating means the wasps stay in a coupled position for a prolonged period of time. To facilitate this, both sexes have evolved unusually shaped genitalia that include spines, grooves and other structures, so that they don’t accidentally disengage. But why don’t the females have wings? Some female flower wasps are parasites of beetle larvae and mole crickets located underground. Winglessness allows females to dig underground and hunt for prey without risking damage to delicate wings. This probably sounds exotic and unusual, but wasps of the family Tiphiidae are common in Australia, in fact we have about 700 native species.

Thynnine wasps are not the only insects lured into pseudocopulation with native orchids. I think I have space for one more story which should be titled “How not to photograph a pseudocopulating insect“. One November some neighbours showed me Large Duck Orchids (Caleana major) flowering on their property. As you can see below they are spectacular flowers that resemble flying ducks, so I grabbed my camera for some shots. 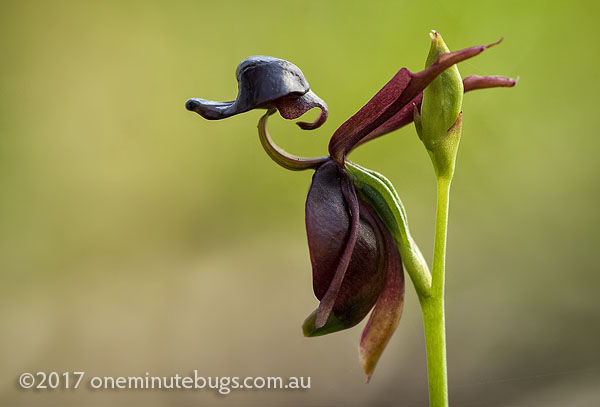 Within minutes of me starting to shoot the orchids an insect arrived and landed on one of the flowers. “Holy cow”, I thought. “It’s the pollinator!” Heart racing I tried to capture the insect but in my excitement I tripped over my tripod and almost flattened the orchid! By the time I got myself organised the insect, a type of sawfly, was trapped inside the orchid and was barely visible. I did get a couple of shots of the insect emerging but they are pretty terrible (see below). 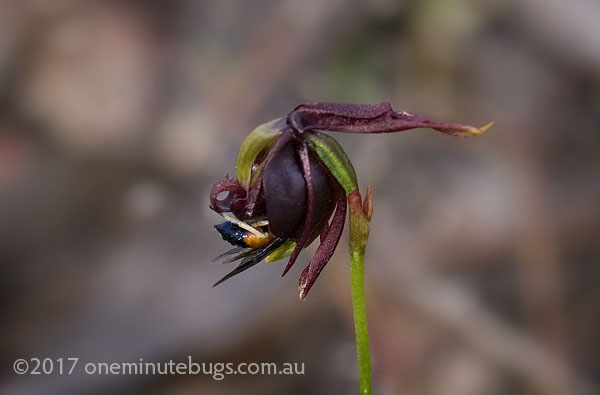 How did the orchid trap the insect? The ‘head’ of the duck is the lid of a trap which swings down by the ‘neck’ trapping the insect inside the ‘body’. In it’s struggles to escape the insect is covered with pollen and will transfer that to the next flowering Large Duck Orchid it is attracted to. Hopefully one day I can have another crack at these shots and try not to be overwhelmed by the occasion!