For every insect out there, there is another insect which will try to eat it or breed in or on it.

Praying mantids are common predatory insects found in virtually any part of Australia in any habitat where they can find prey. Mantids are an insect Order all of their own known as Mantodea, comprising about 2,500 species worldwide, and about 200 Australian species. These insects are commonly called ‘mantises’ or singularly as a ‘mantis’ – but they are more correctly known as ‘mantids’ or singularly as a ‘mantid’.

Mantids are instantly recognisable insects with their triangular heads and their characteristic way of standing with forelegs held together as if they were praying – hence ‘praying’ mantid (image below). The word ‘mantis’ is derived from the Greek word for ‘seer’ or ‘prophet’, which probably alludes to their praying stance. There is a genus of mantids bearing the name Mantis – for example the classic ‘praying mantis’ Mantis religiosa found through Europe, Asia and Africa. Australia only has one representative of that genus, a mantid known as Mantis octospilota. 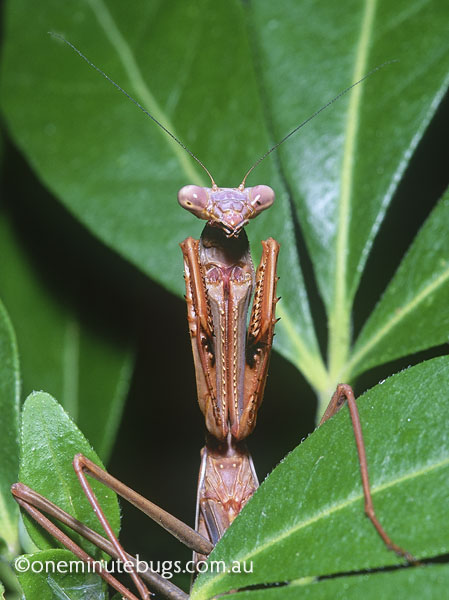 END_OF_DOCUMENT_TOKEN_TO_BE_REPLACED

Many people, especially gardeners, only see ants as pests, but they couldn’t be further from the truth. These days I work weekends in a garden centre, and when summer arrived every second customer I encountered wanted a product to kill ants. One person even asked me for the “Agent Orange” of ant insecticides! They were somewhat bemused when I asked “What sort of ants are they, and why do you want to kill them?”

END_OF_DOCUMENT_TOKEN_TO_BE_REPLACED

Have you noticed swollen bronze-coloured aphids on your plants? These are aphid ‘mummies’ caused by the parasitic wasp Aphidius of the wasp family Braconidae. There are several species of Aphidius which have been released in Australia. A species that has established well and is common in urban gardens is Aphidius rosae, a successful parasite of the rose aphid Macrosiphum rosae.

Aphidius wasps are shiny black, slender insects about 3 mm in length with long antennae. The diminutive size of these wasps makes it hard to see them in gardens, but you will see the results of their life cycle within aphids. Adult female wasps lay their eggs singly inside adult aphids and aphid nymphs. To accomplish this a female wasp must bend her abdomen under her legs and inject an egg into the aphid with her ovipositor (‘stinger’). If you were watching and you blinked, you would miss it, as this operation takes less than a second. Obviously I don’t have many images like this one. 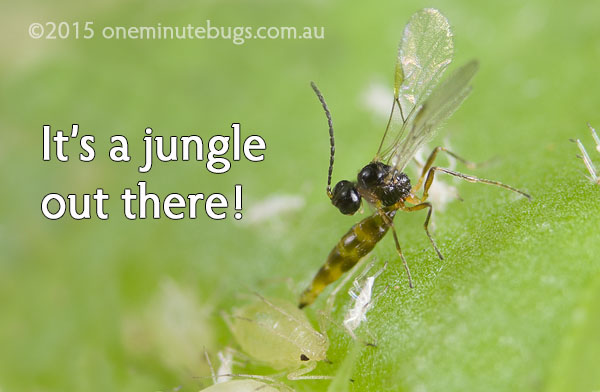