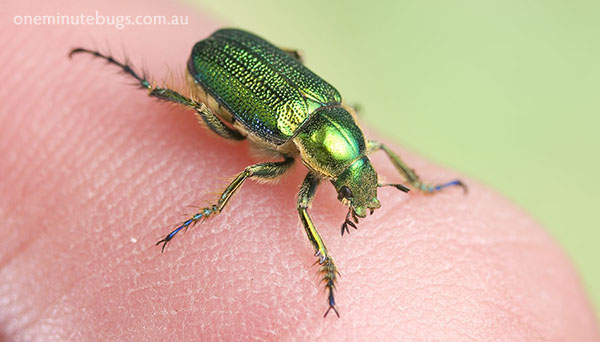 During November swarms of green scarab beetles (Diphucephala colaspidoides) descended on my place. They are notorious leaf eaters noted for stripping the leaves from a variety of plants. The beetles tend to feed in large groups so plant damage can happen quickly and be quite devastating. Can plants recover after such damage?

Back in the 19th century these beetles were known as “cherry green beetles”. Just listen to how Charles French, the government entomologist of the time, describes their attack in his Handbook of the Destructive Insects of Victoria. “When they make their appearance in an orchard, which is about “cherry time”, they make sad havoc, and, being in such countless multitudes, will strip a good-sized tree in the course of a very few minutes”.

The swarms did indeed make sad havoc of a few plants on my property including Melaleuca pentagona, Leptospermum continentale, and Acacia mearnsii. The tea trees were severely chewed leaving some plants looking like they were suffering from drought, the top half of a melaleuca turned brown, and several acacias were semi-defoliated. This all sounds rather alarming but what happened next is worth reporting.

Over the last couple of months the plants have mostly recovered, and the M. pentagona is positively booming. I don’t see these beetle every year, in fact I haven’t seen them in such numbers since the spring of 2006. I know they are only feeding so they can mate and lay eggs, after which they die. Even if I wanted to control them chemically I would be out of luck, because there is nothing registered against them.

As we have seen, green scarab beetles like to feed on tea-tree (Leptospermum spp.) and wattles (Acacia spp.). The generation of green scarab beetles emerging in the spring of 2006 had no tea-tree or wattles to feed on as most plants had been burnt out in the massive Grampians bushfire of January 2006. The beetles had to feed on something and appeared on various properties in enormous swarms causing some headaches in commercial vineyards and orchards. They completely defoliated some plants, but the swarms soon moved on or died.

Green scarab beetles have a life cycle typical of most scarabs in that their larvae feed underground on the roots of various plants. That’s why the larvae weren’t wiped out by the bushfire (heat tends to go up, not down) and were able to emerge as adult beetles months later. Adult female beetles need sufficient nutrition from sap or nectar to lay fertile eggs. I hardly saw a green scarab beetle for several years after the 2006 swarms. I can only assume that many females of that particular generation didn’t get enough nutrition from the plants (vines and berry crops etc.) they had been feeding on to lay fertile eggs. The tea-tree and wattles have now largely regrown which is probably why the green scarab beetles have returned.

Did you know green scarab beetles turn blue when they die? You can see this on the video at 0:42.

See my earlier post below for further detail on green scarab beetles.